The city is characterized by a strong contrast between contemporaneity, mainly shaped by its skyline, history, and symbolized by the iconic Dome of Milan. Thanks to the several initiatives and measures undertaken by the city, Milan is recognized as one of the most active cities of Europe. The future of the metropolis sees numerous projects concerning the infrastructure, the transport, the sustainability, the quality of life of its citizens, not to mention the Milano-Cortina 2026 Winter Olympics Games.

According to Kantar City Mobility Index, Milan is ranked as the 6th most accessible city in the world, both from the perspective of the variety of transport options offered and from their economic accessibility. It is in fact not surprising, considering its wide range of choices of BikeSharing (both station-based and free floating), CarSharing (both electric and fuel; cars and scooters), transport means (tram, busses) and 4 (soon-to-be 5) metro lines. A variety of projects are being undertaken in order to first simplify mobility within the city and its peripheric areas, encouraging citizens to choose all kinds of other means of transportation rather than their car, and secondly to address the issue of climate change by insisting on sustainability, reducing CO2 emissions and their consequences.

An example of these projects is Area C, an area in the city center whose access is restricted from several types of vehicles (mainly high-emission vehicles) and monitored through the use of cameras. Area C exists since 2012, and has expanded to Area B in 2019, enlarging its borders and restricting vehicles that pollute the most.

Milan has been trying to become a more bike-friendly city for quite a while, and the results started to be felt once BikeMi (bike sharing system from ATM – Milanese Transport Agency) was launched. However, the city was not prepared in terms of bike lanes, and the lack of them clearly became an issue. Moreover, this recent period of lockdown positively impacted the condition of the air, and as a result, the city has just announced that 35km (22 miles) of streets will be transformed over this summer, with a rapid, experimental citywide expansion of cycling and walking spaces with the “Strade aperte” plan.

The metropolis of Milan, among other things, is well known for the activeness of its citizens who can benefit from the wide offer of sport facilities, ranging from beginners to competitors. With more than 260 gyms, Milan has the highest number of fitness centers in Italy.

The city has a network of 54 parks, covering approximately 14,681,400 square meters. Most parks, like the Parco Sempione and Giardini Pubblici, feature cycling paths, sporting fields, exercise courses, and gazebos.

Collective sport activities are frequently planned to unite all sport enthusiasts and amateurs, the most famous being the historic “Stramilano”, a half marathon that starts in Piazza del Duomo (the very center), goes around the historical center and ends in Parco Sempione. Stramilano is also open to non-professional runners, giving the possibility to pick a 10k or a 5k run instead. The annual run takes place during spring, and counts about 60.000 participants every year.

Milano-Cortina 2026 will have a strong impact on the sustainability of the city of Milan, thanks to infrastructural and environmental projects that will enhance the quality of life for all citizens. These projects will provide significant improvements to the natural environment, including the development of new ‘open’ spaces where everyone can enjoy Milano’s rich culture, respect and awareness of environmentally-sensitive areas, and the creation of a more liveable, enjoyable, outdoor lifestyle, for which Italy is renowned.

The educational system of Milan follows the Italian general school system. However, the city of Milan hosts different international schools and prestigious universities.

Schools insist on the activeness of kids from a young age. The initiative “a scuola di sport: Lombardia in gioco” is one example : its mission is to increase the value of physical activity in primary schools also as a relational and cognitive activity.

Every year, the Arena Civica Brera hosts competitions among schools attended by selected students from all the schools in the city. In addition to that, Milanese kids are lucky to benefit from a wide variety of options when it comes to choosing a specific sport or a club to join outside of school.

In order to give equal opportunities for all kids to be active in sports, the Regione Lombardia provides the Dote Sport which consists in grants for families in need.

In sight of hosting the Olympic Winter Games 2026, Italian National Olympic Committee (CONI) has already launched some initiatives within primary and secondary schools, to develop sport in the city of Milan. For example, the “Scuole Aperte allo Sport” (Schools Open to Sport) project allows kids aged between 11-13 to discover new sports and stimulate their passion for sport.

The mix of all the measures and habits offered by the city of Milan allows its citizens to indirectly choose an active lifestyle. Starting from the transport systems and the mobility, which encourages workers and students to choose to walk or to bike rather than driving; moving on to the education system, which allows every kid to play sport; to the varied offer of sport infrastructures, allowing every adult to be active and undertake a different activity. 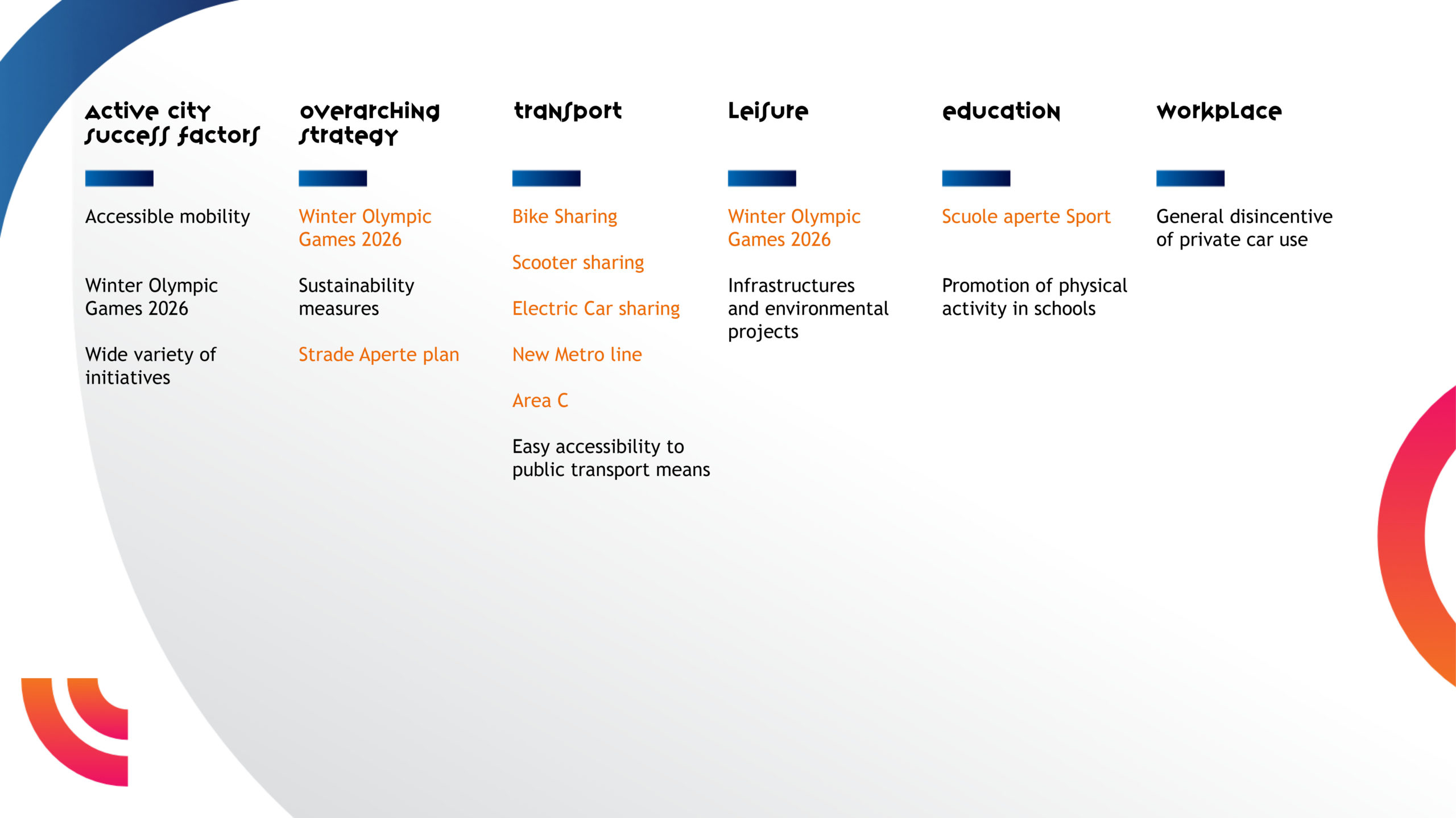