In their own words- Guimarães’ (POR) feedback on the Liverpool Workshop

The PACTE project held its first workshop in Liverpool on November 15-16, where project partners were able to welcome urban planners, physical activity experts and city representatives.

Paula R. Nogueira took the time to share her approach to the workshop and provide further insight into the municipality of Guimaraes (Portugal) with which she works closely. 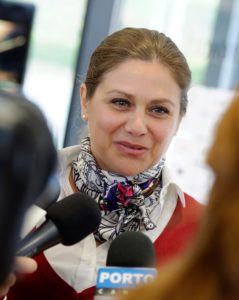 What is your role and responsibilities within your municipality?

Currently I am the director of the Sports Studies Center of Guimarães (CEDG). We started our work in January 2018 in the context of the municipal company Tempo Livre. CEDG is focused on researching, monitoring and studying sport and physical activity phenomenons in their multiple dimensions. CEDG also focuses on the trainings and qualifications of local sports agents, on the promotion of physical activity and sports for all, and on supporting decision-making on a political level. Our work is based on permanent collaboration with Tempo Livre and the municipality of Guimarães.

Does your municipality already have a sport and physical activity strategy?

Guimarães has a political strategy for sport, which has been in place for a long time. The past 30 years in particular have covered a lot of work. Firstly, building the necessary sports facilities  enabled the implementation of a comprehensive policy of sports; secondly, programming sport policies and promoting services and activities, both at competitive and leisure level. Health, well-being and quality of life were always part of this equation and Tempo Livre has been the support of this dynamic. All this work has led the city to a level of excellence recognized in Portugal and abroad. So, in 2013 Guimarães became the first Portuguese city to be declared European City of Sport. Throughout 2013, more than 300 sports events were promoted involving thousands of people engaged in a new concept that was “sports for all”.Recently it was declared as friendly city of sport.

With the Sports Studies Center a new step forward was given in this path and very soon, Guimarães will present its municipal plan to promote physical activity, health, well-being and quality of life, in line with the guidelines of the national plan and international recommendations to fight inactivity and sedentarism.

What are the biggest challenges you face to get more citizens more active?

We are really committed to this purpose and particularly concerned with childhood obesity, inactivity of adult women and the physical condition of the elderly. Therefore, our biggest challenges are to combat sedentary lifestyles in general, women sedentarism in particular, but also articulating sport offers with the availability of infrastructures, with a good campaign to raise citizens’ awareness of the benefits of regular physical activity and how it makes their lives healthier. We also have to involve a broader range of entities and engage the clubs and sports associations into the need to combine competitive objectives with their social responsibility as promoters of sport practice and physical activity for all. Concerning women, we are involved in a Erasmus + Sport project called “Sports for Women in Urban Places” and we hope to implement a pilot program in 2020 to attract more women to outdoor sports.

Did Liverpool’s shared experience provide you with new insight and ideas?

Yes, certainly. We’ve been following very attentively the Liverpool example. They have done such important work! It’s amazing how Liverpool became a leading city in terms of physical activity and sports promotion. The workshop allowed us to gain an excellent exchange of experiences with Liverpool, of course, but also with other European cities that share common problems and challenges. Simultaneously, we realized that part of our work is on the right path. It was very enriching and a fantastic opportunity to debate ideas, to question each other and join with partners who have such interesting programs to promote physical activity. This was really a great experience fostered around friendly spirits between different European countries looking for sports citizenship as a new approach. I was particularly moved by the programs that highlight the values of friendship, closeness, solidarity and team building. I keep in mind the community project of Everton FC, fantastic! Sport and physical activity can turn into something much bigger than competition and we all can profit from it, not only in terms of health benefits but also enriching human values for which we must strive, and stand by, in Europe.

Why did you decide to participate in the PACTE project’s first workshop?

Guimarães has an international strategy. Known as the cradle city of Portugal, it was declared by UNESCO as world heritage in 2001, became European Capital of Culture (2012), European City of Sport (2013) and was named for European Green City award. It’s a vibrant cultural, historical and touristic city. People from all over the world visit Guimarães and building long-standing partnerships with international partners and networks is part of the city vision for the future. Through the exchange of experiences, like the PACTE workshop, our projects will grow and gain an international dimension. By sharing (our) best practices we also can improve some projects and reshape them, aligning strategies with European dynamics. International experiences such as the PACTE project promote cohesion, community and union spirit, and these are qualities that define the way we are as people. Guimarães has been an active participant in initiatives promoted by TAFISA and we are looking forward to becoming an Active City. Participating in the PACTE workshop was very important because it gave us a new perspective about citizenship, which was yet to be considerered in sports. It is a very important step because it directly involves the role and responsibility of each and every citizen. We hope to follow PACTE and continue to be inspired by it, which is very encouraging.

Read more !
Home | In their own words- Guimarães’ (POR) feedback on the Liverpool Workshop