Brussels is not only known as Belgium’s capital, but also as the heart of Europe as it hosts most of its institutions. These professional perspectives offer Brussels a real appeal to many workers, however the city must be able to maintain and develop itself at the same level as that of its status. In order to organize a responsible and meaningful development, Brussels defined its priority in a ‘‘City Majority Agreement 2018-24’’, a strategic document that gathers all the main objectives to be implemented in the years to come. Core actions are taken regarding the well-being of the inhabitants and how to foster it by making the city closer to them and offering more active possibilities to everyone on a daily basis.

Extremely active on building a more efficient, responsible and healthy transport network in the city, Brussels has elaborated a regional mobility plan ‘Good move’ in collaboration with their inhabitants in order to foster transparency and appropriation of the coming measures in the city. The long consultation they did through surveys and meetings has been fruitful and the city is now able to understand citizens’ concerns and act in adequation with it. Brussels city will implement policies in order to influence and control the city’s transport demand rather than accommodating the city to the transport’s demand. Therefore, every public space will be arranged according to the ‘’STOP’’ hierarchy (pedestrians have the priority, then bikes, common transportation and finally, private cars). Giving the priority to the pedestrians and active people is an easy leverage to encourage people to abandon their cars.
To really give the Belgian capital back to its inhabitants, the city is planning to create ’10 minutes cities’ within the city so that every facility, green space, school or shops are within a 10-minute walking distance. This will encourage Brussels’ inhabitants to walk more, and will contribute to building a safer and healthier city to live in. But as you can’t always stick to your neighbourhood the city has to put in place measures to allow mobility in the city while reducing congestion and pollution.
Thus, Brussels’ active mobility policy have been intensified with the construction of more than 35 kilometres of cycle paths since 2014 and the development of different solutions to be active while moving, such as city bike rentals, and innovative parking solutions. As an example, Cycloparking is a FEDER 2014-20 project that put safe bike parking boxes in many places of the city to relieve the citizens from the burden to find a safe spot for their bikes.

Part of the City Majority Agreement relies on the access to sport for all with more flexibility on sporting facilities’ opening time and will automatically install bike parking near sporting infrastructures. Besides that, the development of active mobility with less personal vehicles inside the city will make the public spaces more welcoming with a better air quality inside a healthier city. Brussels tends to increase green spaces inside the city and put sporting facilities such as outside workout structures inside as well as healthcare pathways to promote activity for all.

Raising awareness on the importance daily activity and giving schools the ways to do it is key in Brussels. In the City Majority Agreement, it is highlighted that there is a need to simplify active mobility for school staff and pupils by associating parents to the initiative (so that everyone in the school is informed about safety requirements, parking bike possibilities etc). Schools are to be renovated to be able in such a way as to host parking for active means of transportation, so that families are tangibly encouraged to move around actively. Alongside these incentives the city is engaged in making the school areas car free zones in order to improve safety, air quality and global well-being.

Sport at workplace will be enhanced thanks to the transportation policies that will help all city-workers be able to go to their workplace actively. This goes with the possibility for companies to have fiscal advantages if they reimburse the employee’s journey to work if done by bike. Such incentives correlated with all the active mobility solutions available in the city make possible a more active daily life. 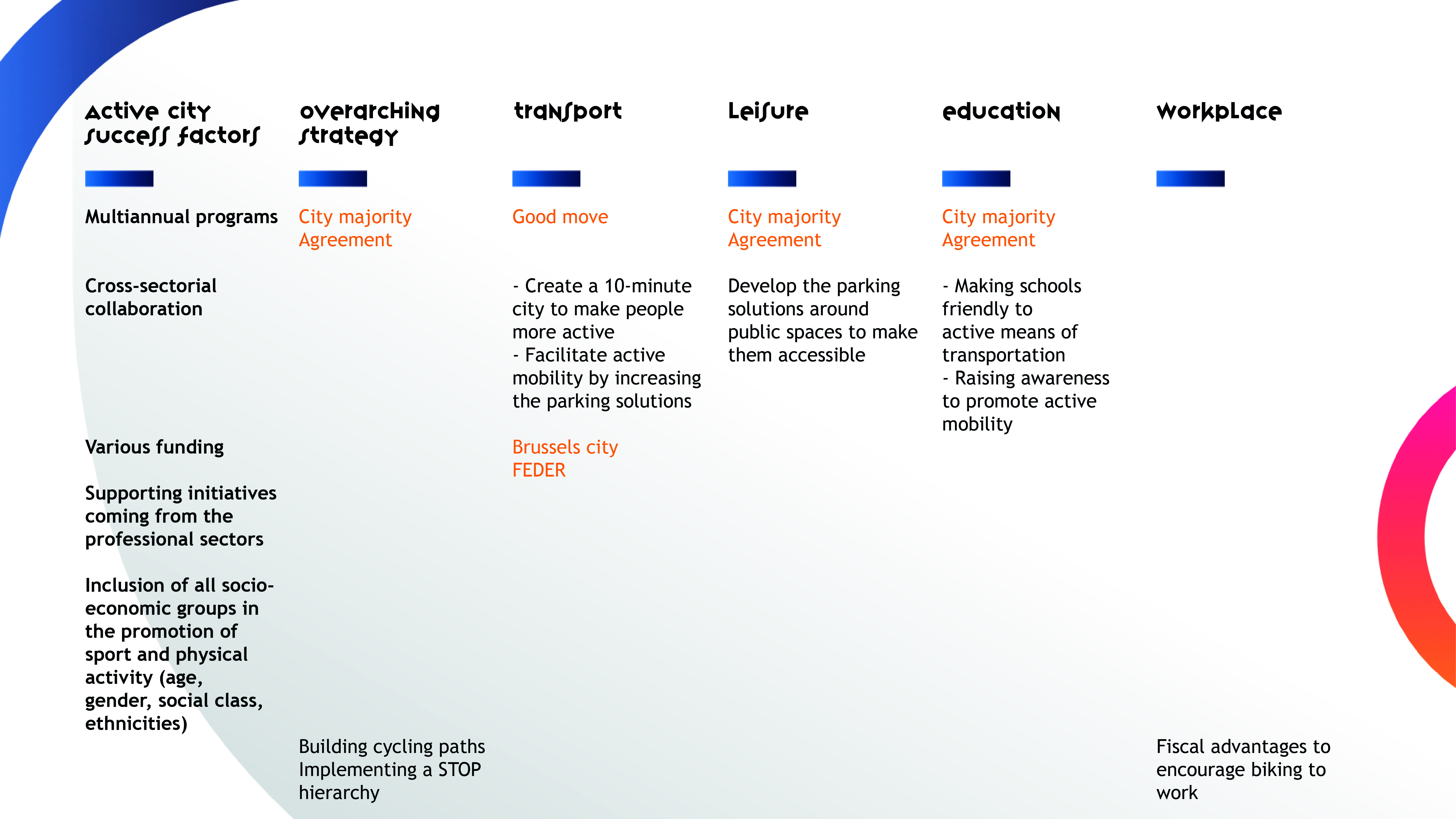