The city of Gdansk isn’t only home to an important historical past and stunning landscapes- it’s also at the origin of an ambitious development policy on transport and education in their Gdansk 2030 + development strategy.
Following a citizen consultation, the municipality has built a program that defines the guiding lines on how they want to shape their city, around strategic topics such as education, transport, health, public spaces or even culture.

Transport is central in the city’s will to develop as Gdansk is striving to increase the quality of life it offers its citizens. To live up to these ambitions, they’ve notably joined a 4-year European program : Making Innovation in Mobility and Sustainable Actions (MIMOSA) that focuses on active mobility. By exchanging with four other cities and accounting for the opinions of regular public transport users from their city, MIMOSA has elaborated 69 measures that include some accessible and originals ideas. They started the ‘Cycling May’ where, every month of May there is a social campaign that encourages children and their parents to bike instead of using a private car in order to reduce carbon footprint, but also to decrease the city’s congestion issues. Besides this initiative they promoted active mobility and particularly biking by distributing a city cycling-map to all households.

The success of such an operation has seduced other cities of the metropolis that are now planning to implement the same social campaign in their own cities. In addition, raising car awareness has been central to Gdansk for many years thanks to their social campaign “Kierunek: szacunek” (“Direction: Respect”).
Keeping up the good efforts, they are hosting a congress on the topic in September.

Promoting active mobility is a direct consequence of the city’s will to increase the quality of life they can offer their inhabitants. In addition to encouraging active mobility, Gdansk is facilitating access to their numerous public spaces, multiplying the number of green parks across the city, to freshen the air, offer further outdoor spaces to enjoy, and reduce the disturbance of car pollution.
Creating an enjoyable environment for everyone is central that’s why bike paths have been developed in the city and metropolis, especially alongside the coast which helps showcase the natural assets of the city.

Gdansk’s next generation is set to most likely be well-informed on transportation issues and ready to give up on private cars. ‘Cycling May’ has been met with tremendous success, often seeing a new edition being reconducted well before the next month of May comes around. The campaign helps children learn and adopt healthy habits by promoting daily physical activity and offering small rewards for those who do so.

Sport at workplace policy has still to be developed and enhanced, but taking into account that the whole policy around active mobility is encouraging people who work in Gdansk to do sports in their everyday life by joining their jobs by bike is already promoting the idea of sport during workdays.
While physical activity and sport in the workplace policies are still to be developed and implemented, Gdansk’s active mobility strategies and campaigns inevitably affect worker’s daily physical activity levels. This being said, some small but promising initiatives already exist such as a biking contest that calculates the total number of cycling hours per company and rewards the most active one- 1600 companies have already taken part!
The following table aims to showcase some of Gdansk’s initiatives to be a more active city in order to have a better emphasis on how to foster activity and movement in your city. 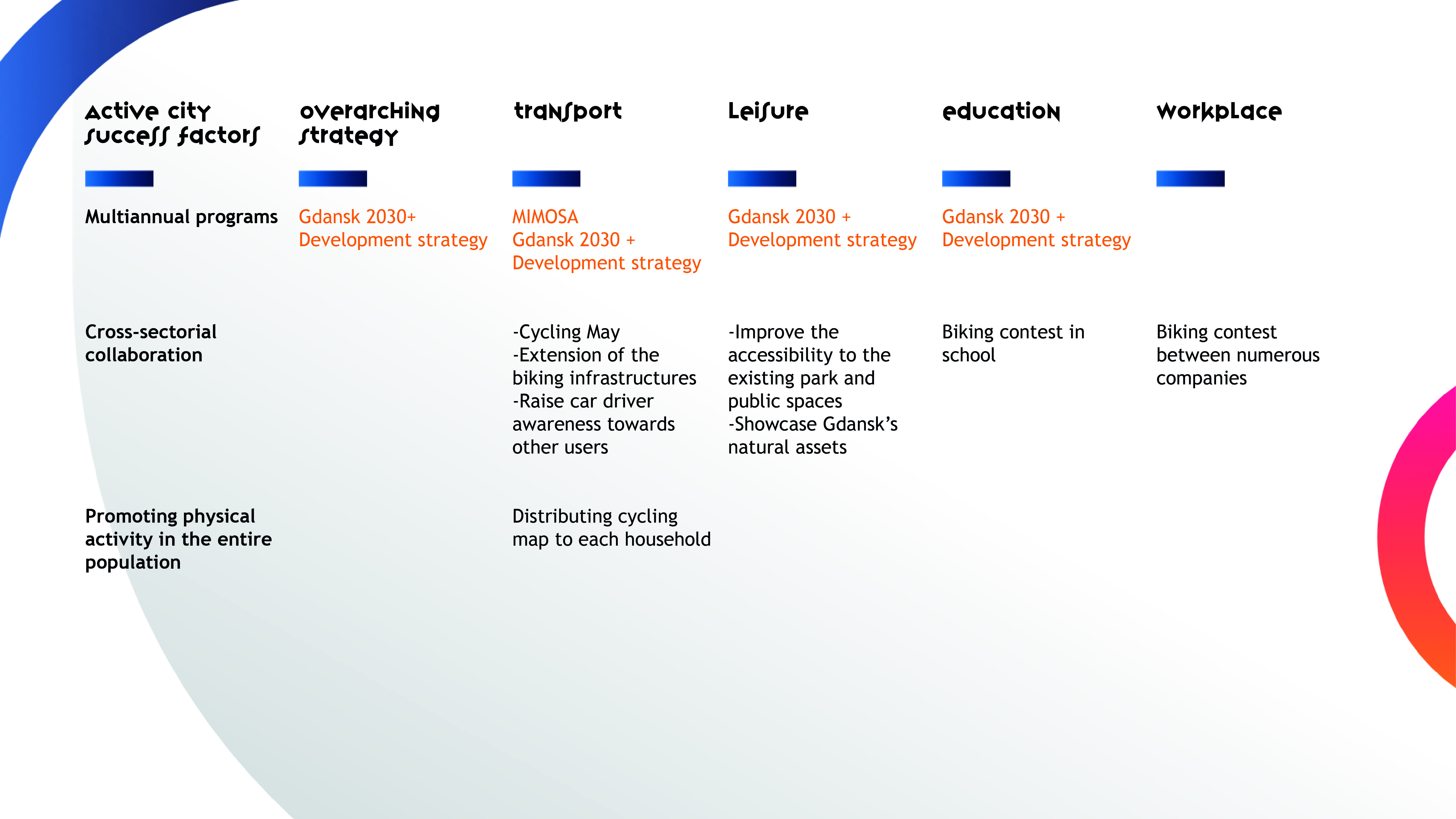