Lisbon is the capital and the most populated city of Portugal with more than 500,000 inhabitants. Despite having experienced significant challenges in the past, particularly in 1755 when an earthquake demolished the entire city, Lisbon has made great strides in enhancing the quality of life of its citizens and enhancing the role of sport and physical activity at the municipal level.

Built on a unique topography, Lisbon is undoubtedly one of the most fascinating cities in Europe. In the last decade, and especially since 2017, Lisbon has undertaken a meticulous strategy to reinforce the environmental protection as well as the economic growth of the city. Within the large design of being an innovative and sustainable European hub, the city of Lisbon takes into much consideration the role of active mobility, sport, as well as physical activity. These are the reasons why Lisbon won the European Commission’s “2020 European Green Capital” award and was chosen to be the “European Capital of Sport 2021 by the European Capitals and Cities of Sport Federation (ACES Europe). These international recognitions corroborate the commitment and the effort the city of Lisbon is carrying out to translate important needs into concrete actions.

Lisbon has a cohesive city-wide vision for sustainable mobility that has now embraced a brand-new mobility paradigm based on the promotion of pedestrian spaces, cycling and the use of public transports.
The process that led Lisbon to be at the forefront of the new green mobility started in 2009 with the publication of the Strategic Charter 2010-2024 where Lisbon is defined as a “City of Neighborhoods” — indicating multifunctional walking neighborhoods as sustainable mobility networks (namely public transport and cycling). In 2012 the Lisbon Master Plan introduced the idea of “Lisbon for people” and no longer for cars, with a set of specific actions that empower walking, cycling and public transport, along with new and innovative mobility services, focusing on sharing and aiming at the reduction of traffic volumes and their negative environmental impacts. In 2017 Lisbon created an Urban Mobility Fund of 15 million EUR to finance the management of urban roads, and carried out several initiatives to make the city more active. These include the creation of pedestrian routes linking historical neighborhoods, the creation of a programme for requalification of the city called “One Square in each Neighborhood”, and the promotion of walking and cycling events. These initiatives and many others represent the cornerstones of the city’s transformation.

The City Council of Lisbon recently released its new strategic mobility vision for 2030, MOVE Lisboa, reaffirming its commitment to rethink Lisbon’s transport options. Here, a focus on cycling is needed: the increase of the cycling infrastructure in the urban network, together with the introduction of the public bike-share system GIRA, helped change people’s attitudes towards cycling. Despite this important shift, still only about 0.6% of the trips in Lisbon were made by bicycle in 2017. Although this number shows a growth of around 200% compared to 2011, the substantial increase was still far away from the 40% modal share registered in some European cities. Lisbon’s cycling infrastructure has been developing constantly since 2009, with a strong focus on the city core since 2015, when cycle paths started to be built on the city’s central artery and uptown avenues. By 2021, the city is working towards reaching 200 kilometres of cycle lanes, assuring that 93% of the population has access to a cycle lane within 300 meters from their home, as well as offering a total of 27 cycle-pedestrian bridges

Lisbon is committed to protecting and enhancing its natural areas, while also providing quality outdoor recreational spaces for its citizens. This is exemplified in Lisbon’s management of the Monsanto Park, for which the city has received the Sustainable Forest Management Certification.
Lisbon is also connecting its green areas with the Vale de Alcantara green corridor. The corridor will link up the city’s natural amenities, such as Monsanto Park and the Tagus River, with cycle paths and walkways, giving its citizens greater access to green spaces. The city will also create new green space along the corridor, allowing the wildlife to flourish and protecting its biodiversity.

In addition to its green transformation, Lisbon will also be the Capital of sport in 2021. This important achievement allows the city of Lisbon to be recognised as an example for sport and physical activity in Europe, and results in a vast panorama of activities and initiatives that target variegate groups of people. Several projects have been put forward over the last years: MOVE’IN, for instance, is a regular physical activity programme that encourages the adoption of an active lifestyle. Professionals specialised in the area of physical activity train people with disabilities (from 10 years old) who live, study, work or attend institutions/associations in the city of Lisbon. It lasts for 11 months and takes the form of 2 weekly sessions in an exercise room, a gym and/or a swimming pool, according to local conditions. Another project, Lisboa +55, is intended to encourage the improvement of the quality of life, the reduction of sedentary lifestyle and the creation of healthy lifestyle habits among the senior population by promoting the practice of physical exercise.

Furthermore, Lisbon has always organised numerous sport events. The Velo-city Lisbon 2021 is a clear example of that: Velo-city is widely considered as the premier worldwide annual cycling summit, serving as a global knowledge exchange platform. The 2021’s edition will be held in Lisbon in June and it will contribute to the success of a city that has invested a huge sum of money on a meticulous sport strategy.

When it comes to education through sport, the city of Lisbon follows an innovative and comprehensive approach that makes use of physical activity and sport training as a means of promoting student success, healthy lifestyles, values and principles associated with active citizenship. The Curricular Physical Education Support Program is divided into four blocks that cover all the aspects of a healthy lifestyle: Swimming, Games, Rhythmic and Expressive Activities, and Lisboa Sem Rodinhas (Lisbon Without Wheels).
The school programme “Lisboa sem Rodinhas” — aimed at students in the 1st cycle of Basic Education in Lisbon, seeks to raise awareness of sustainable mobility and an active lifestyle and teaches 100 children from the Leão de Arroios Basic School to ride a bicycle in a safe, fun and responsible way. As part of the Curricular Physical Education Support Program, the activities take place in a school context, with free participation. Six classes, over three consecutive weeks, involve about 1,500 children in the 2nd year of schooling. The programme is part of a set of initiatives by the municipality, with a view to improving the conditions of mobility and security in the school environment, in particular through the creation of safe paths.

Furthermore, considering the position of Lisbon and the importance of rowing and sailing, schools together with the municipality have started the initiative “Clubes de Mar”. The initiative is part of the Municipal Water Sports Development Program in Lisbon and aims to facilitate access to the Tagus River to 2nd and 3rd cycle students, with the promotion of rowing and sailing, as well as the development of new skills. 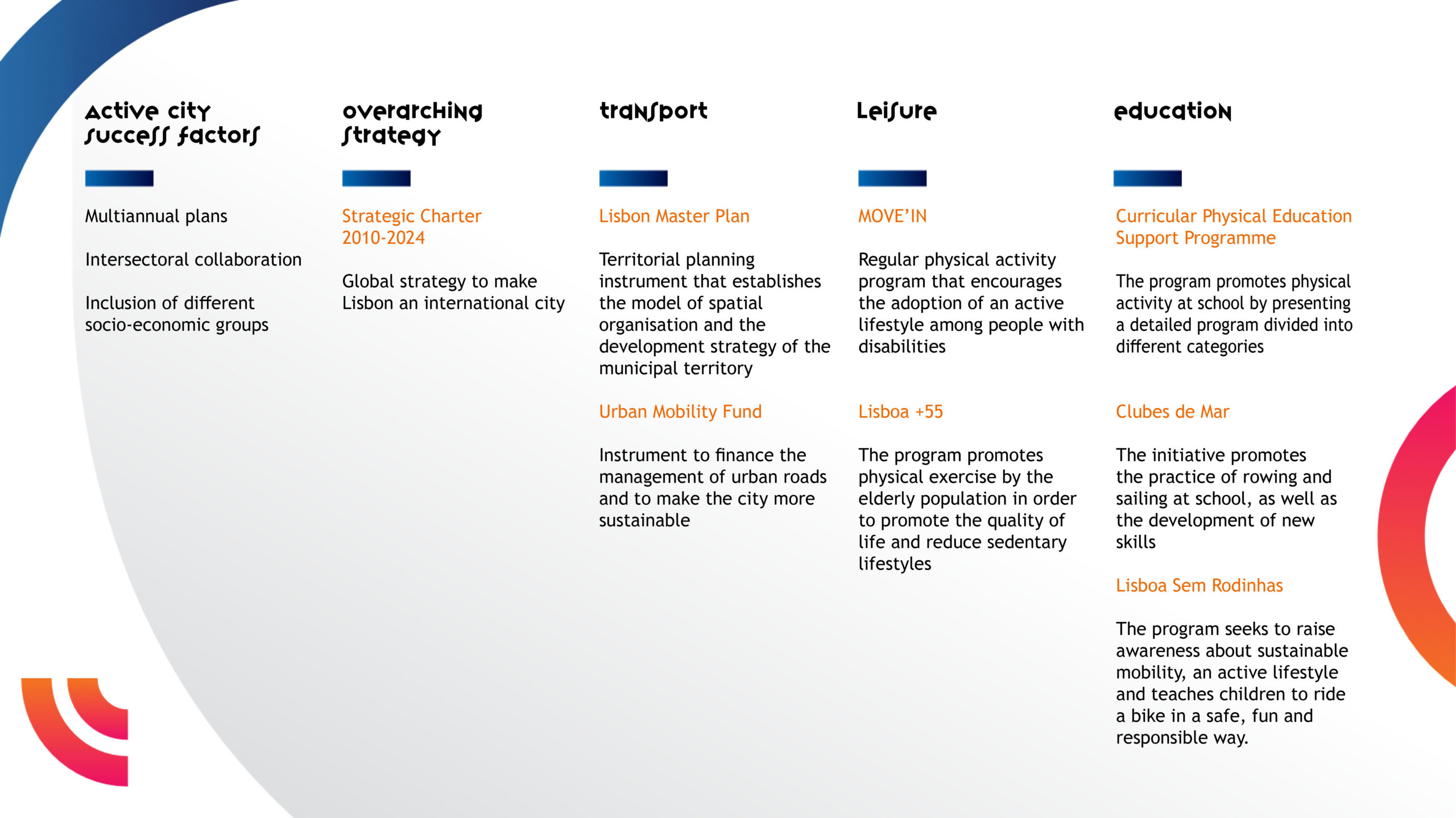 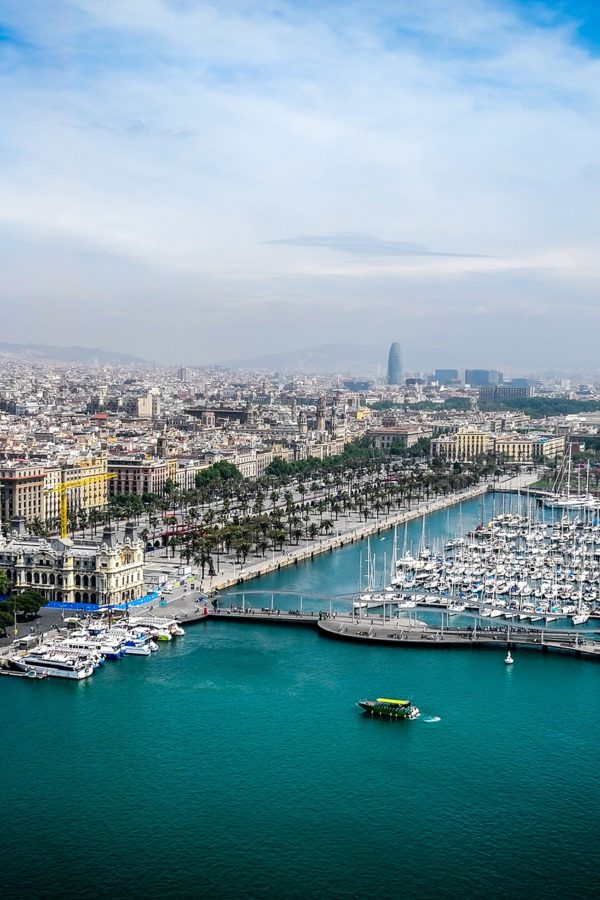 The city of Gaudi, beating heart of Catalonia is a unique and active city globally renowned for much... 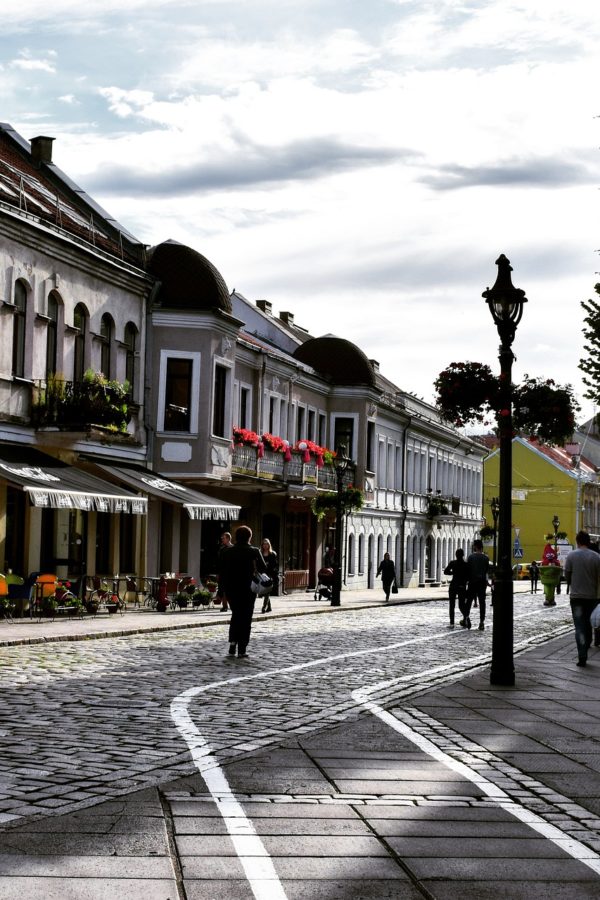 Kaunas is the second-largest city in Lithuania and an important centre of Lithuanian economic, academic, cultural and sport life.... 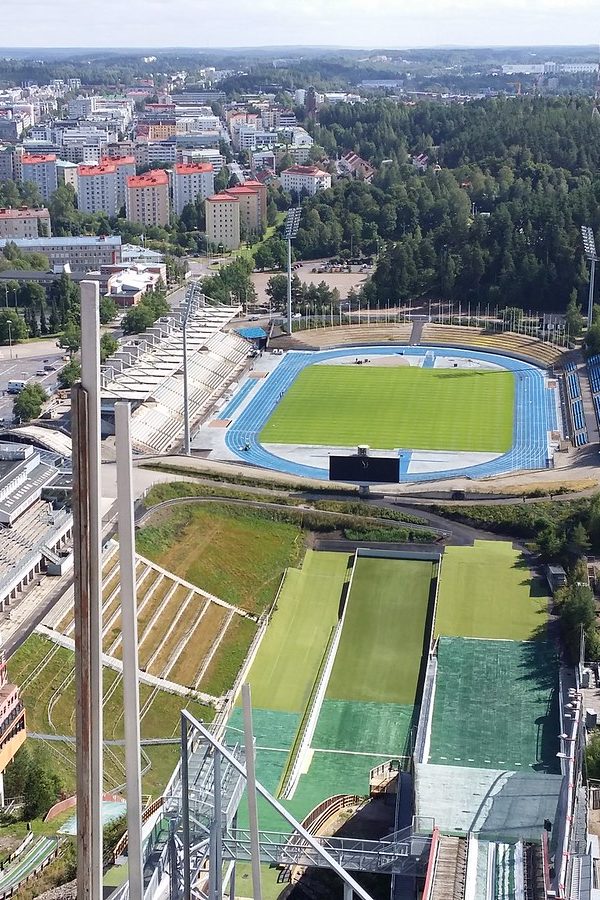 In the seventies, the city of Lahti and its surroundings were very polluted due to rapid growth and urbanisation....